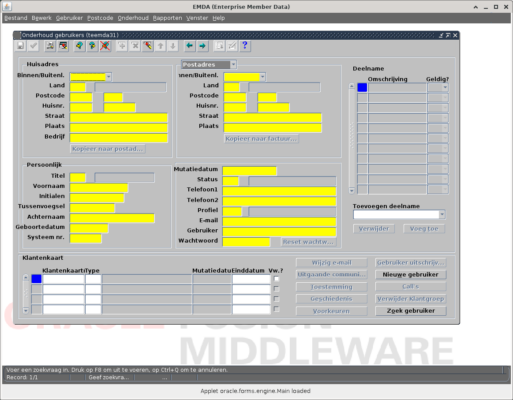 TL;DR; See https://github.com/atkaper/oracle-forms-standalone-runner on how to download and run the forms viewer… If you want the background as to how I got there, read on…

At the office, we still use a couple of old/legacy oracle-forms-11 applications. The “normal” (designated) users will run these from Windows, in the Edge browser switched to old Internet-Explorer compatibility mode… You can not start Oracle Forms Applets in any other browser or operating system, as applets are no longer supported.

As I do run a Linux machine, I do not have Edge, and needed a different way to run the Oracle-Forms applications. To fix this issue, I went looking around a bit on the internet. A java applet can be started outside of a browser, so it was just a matter of finding out how.

Java 8 has a command “appletviewer” which can be used to start an applet from the command line. This however requires you to have the applet source-code, and in there you need to add annotations to get it started properly. This was no option for me (see for example: https://www.geeksforgeeks.org/different-ways-to-run-applet-in-java/).

I did find a couple of java code examples on the internet, which can start an applet. From those, I started testing using this small example (from https://ecomputernotes.com/java/awt-and-applets/appletfromcommandline):

In this example, I added the jar files I could find on the Oracle Forms start URL/HTML page, and changed the line which instantiates the applet:

No luck… The two bottom lines actually give a clue as to what goes wrong, as in that case I got an exception:

Conclusion, the simple example above is not good enough 😉 Back to searching the next example(s), and I concentrated in the search on finding code which could pass on the applet parameters we need…

The best example I found was this one:
http://www.java2s.com/Code/Java/Swing-JFC/AppletViewerasimpleAppletViewerprogram.htm, created by Ian Darwin. Next to starting the applet, it has a partial implementation of AppletContext and AppletStub interface functions, which can be used by the Applet to talk to its startup parent. These context and stub methods also had the one to read the applet parameters, this is what I needed.

To complete the example to a usable solution, a number of changes and additions were needed:

The result of all of this can be found in the GitHub project: https://github.com/atkaper/oracle-forms-standalone-runner

Instructions for use/start are simple:

in above start, make sure that either the java 8 context is default (by setting PATH and JAVA_HOME), or just prefix the java command by the exact location where your java 8 executable is stored. On my machine for example I use: ~/bin/java/jdk8/bin/java instead of just java as I have multiple versions of java installed.

Note: I have made a new version, which supports scaling the screen, and font-size. Here’s a partial screenshot of the fixed version:

I do not have much experience with building Applets, but it was quite nice that I did get this to work! It’s great that I do not have to find a workaround to run Edge, or use a remote desktop.

My use-case was starting Oracle Forms, but I think you should be able to use this code, or just add some small tweaks to it, to start other (old) applets as well. Just make sure to look at the HTML which starts the applet, and possibly update the source to read the parameters from it if my version does not pick up the right ones.

Note: during my quest of finding a way to start applets, I also came across a Chrome browser plugin (CheerpJ Applet Runner) which runs applets using JavaScript to simulate java 8. This did do some startup for Oracle Forms, but gave me the same exception message I got when I did not yet HTML decode the start parameters! Perhaps that applet launcher plugin also would work, if we just edited the HTML start page 😉 I did not try that.

I did notice last week that the Launcher did not work on our Load-Balanced PRODUCTION servers… The Oracle Forms Applet does not read and pass back the cookies from the servers properly. It did depend on running in a browser to let the browser handle those. It would give me this error:

A fix / workaround was needed 😉 And of course this fix has been build!

I have altered the Launcher code to add a special Cookie-Retaining-Proxy between the Forms Applet, and the back-end servers. This is needed to keep sticky sessions with the proper load-balanced back-end server instance. Just download the latest version of the executable from the GitHub project to make use of this. The README in GitHub has some more details on that part.

I also found a nice bling-bling override parameter, with which you can choose your own background image.

Just add the next parameter to your command line: