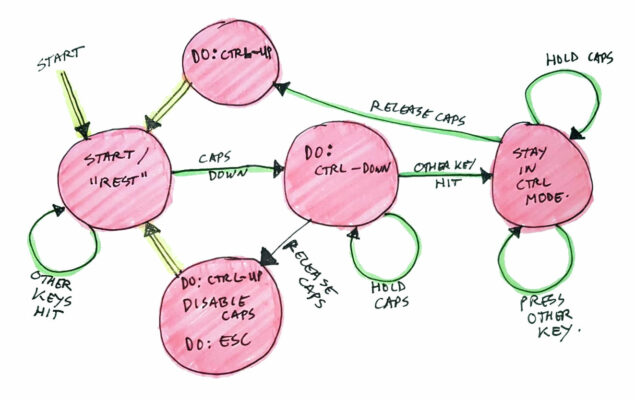 Enable special functions on the CAPS-LOCK key, to support VI users 😉 This script was created by me as a sort of “study” object, not for any serious use.

A colleague of mine has created a Linux kernel module to modify his keyboard behaviour to what is described in this document. I was just wondering if it would be possible to create the complex logic he needed, without having to make a kernel module. As maintaining a kernel module might require some work or rebuilds on every new kernel release.

So what are we talking about here?

Reason for the new behaviour is mainly for VI users. To get back in VI command mode, you can hit the new caps-lock function, which disables caps-lock state if it was on, and executes the ESC key.

Next to this, the simulation of it being a CTRL key when used with other keys, is to ease typing of for example CTRL-A, CTRL-W or other CTRL combinations which get your fingers into a Gordian knot.

Bonus implementation / feature: you can hit ALT + caps-lock to toggle the caps-lock state. See CAPS_TOGGLE_MODIFIER in the python script on how to disable this, or change it to shift or control.

You can run a check script to see keyboard mappings. You can run that before starting the
tool, or after, or after resetting (killing) the tool.

The script to start the tool is:

Or you can start it with a parameter to NOT map the pause key as caps-lock-toggle (you can use alt + caps-lock to toggle caps state):

It does reconfigure some keys using the xmodmap and setxkbmap commands. And then it starts the vikeying.py python script (as root) which does more of the magic.

Note: the DISPLAY_DEBUG_INFO flag in the python script will determine if the script runs in the foreground with debug logging to the console, or that it will go run in the background.

When you are done playing, or are in need of restoring the keyboard mapping, you can execute:

Note: both vikeying-runner.sh and reset-keyboard.sh require sudo root permissions to run. This is because the tool needs access to some privileged I/O devices to which only root has access. Quite likely because the technology used in this script can also be used to make a keylogger. So only run this when you trust it (so please first read the code thoroughly, it is not that much code anyway).

In the python script, there are three settings you can play around with:

If someone would seriously consider using this tool, or a modified version of this, I would suggest to copy the script files to /usr/local/bin/vikeying/* and change the files to root:root to prevent anyone or anything from changing them. And configure a /etc/sudoers.d/vikeying file to allow sudo use to start the tool without needing to enter a password. And then put the start command in the list of applications which need to start after login (Mint has a GUI widget for that to configure things to automatically start).

All done. I hope this works on other Linux machines / distributions also.

The requirements are not fully met by the python script, you need to use some other tools to set-up some stuff also, next to running this script. The other things to arrange outside of the script are remapping the pause key to act like a caps-lock toggle. And to disable all functions of the existing caps-lock key. Next to that, the python script will ADD the new behaviour on the caps-lock key. The vikeying-runner.sh script will execute those additionally needed tools/commands.

The script has only been tested on my Linux-Mint 20.2 release (is a bit like using Ubuntu). My window manager is XFCE. My guess is that the python script should function on any flavour of Linux, but the xmodmap and setxkbmap commands might need some tweaking. Just remember that you should aim for a caps-lock key which does nothing anymore after you are done with those two commands. The python script will fill in the blanks afterwards.

The script does seem to work, however, I have seen some occasions where I ended up with a non-working ctrl-key, or mysterious enabling of caps-lock-state when hitting the caps-lock-key together with some other keys or when keeping caps-lock pressed for a while (which it should not do that anymore with this script!). I did find (and fix) a small bug in the script while writing the blog page about it 😉 So maybe the weird behaviour is gone? I suggest you just try it out for a while…

My conclusion would be that this was a nice exercise to find out what is possible in keyboard manipulation. I suspect that there might be some small timing issues to iron out, or perhaps some concurrency issues or other race conditions to dig in to. (I hope this is fxed).

I will leave this as is for now. My caps-lock key has a completely different mapping which I got used to (compose, using setxkbmap -option compose:caps, for example hitting caps + ” + e will lead to ë), so I won’t be running this set of scripts. This script might serve to others as some inspiration for any complex keyboard macro handling.

I am impressed by what you can do with such a small python script! And thank you Ovidiu for providing the challenge of trying to implement this without kernel module (but I suggest you keep using your module ;-)).

Of course this would not have gotten anywhere without an internet search engine (duckduckgo), which landed
me on these two pages: