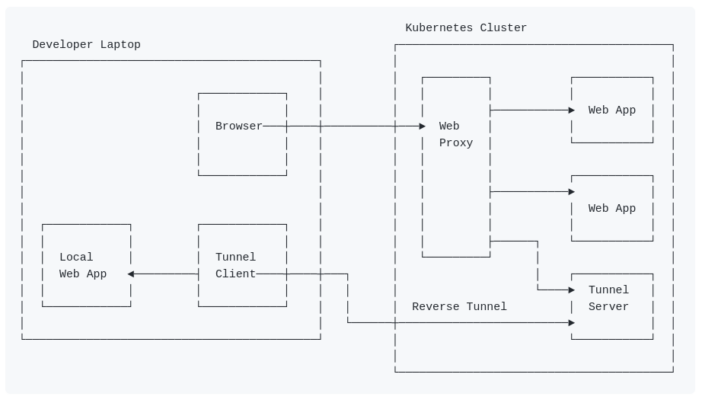 I wanted to have the option to run a web-application on my local machine, and make it seem as if it is running as part of a collection of web-applications on a remote cluster. The collection of web-applications on the cluster make up the whole of a web-site, and during development you might want to “replace” one of the web-app’s by a version on your own machine, which is under development. Note: where this story mentions web-app or web-proxy, you can also replace that by rest-service and api-gateway. It will be usable for those also…

As our clusters have no way of talking to a developer laptop, due to firewalls and VPNs which are in between them, I needed a setup with a reverse tunnel.

To setup a reverse tunnel, you need a server component running in the cluster, and you need a client application which starts a connection to the server, to ask for reverse traffic to be send to the client.

If you search the internet, you will find multiple tools which can do this. I thought it was a nice challenge to see if I could create (program) such a tool myself, and have the next set of requirements in it:

It took me some days to build my tunnel (server in java + spring-boot, client for Node-JS), and debug / fix the issues in it, but I finally made it 😉

See image at the top of this page. The next set of points explains it in some more detail:

The underlying idea of how the tunnel functions is simple, but the implementation was a bit more complex.

Even reading this summary makes your head hurt 😉 The implementation is much more complex, as it has to handle timeouts, errors, registration, port allocations, open up server ports, start listening threads, handle reporting, and more… And I’m not a Node-JS programmer, so I also had to do some searches to find out how to do networking in there. Just have a look at the code if you like to know how this works internally. The client looks a bit simpler than the server.

If you want to use this tunnel, have a look at the README.md in the project. Note: this does assume that you have knowledge about Java, Spring-Boot, Node-JS, Kubernetes, Docker, and networking. It is probably not documented well enough for others yet.

Status: this is just a proof-of-concept. I only tested it on my local machine for now. I will give this a try at work, and see if it suits our needs.

I might update this post (and the GitHub project) when we tried using this for a while. I plan to add some Kubernetes deployment example YML files, and add some feedback of how usable this tunnel is, or if we abandoned it.

At least this was a nice project to dig in to, and to learn some more of the deeper details of parsing and tunneling HTTP/1.1 traffic. And to get to know the Node-JS network functions.