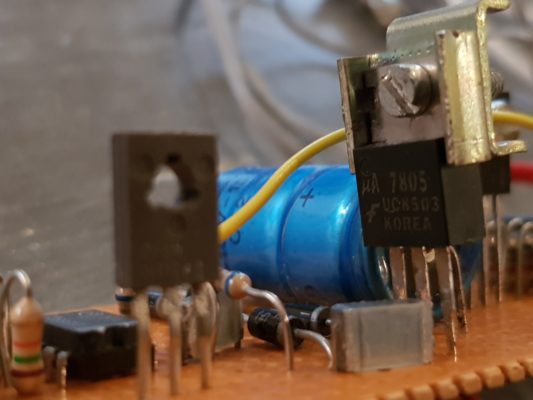 Today I was cleaning out an old moving-box, and found a very old small project of mine 😉 It’s a set of game / quiz buttons, which record who did press first. There were only two buttons connected, but the circuit was suitable for 4 of them (two were cut off).

There’s no circuit diagrams or software available, it’s just a bunch of images and movies to show the old stuff.

It’s a simple setup, you can almost guess the circuit. There’s a bridge rectifier from 4 diodes, a big capacitor, an 7805 voltage regulator, a GAL16V8 programmable logic chip, 4 beefy transistors, some resistors, an NE555 with some resistors, capacitors, a transistor, and a speaker. The buttons are old micro switches, and the lights some bicycle lamp lights. All of this is powered with an old transformer and even older on-off switch. To make the thing complete, it was packaged as dangerously as possible, in a cardboard box (yes, also the 220 volt parts).

My guess on the build year is probably somewhere around 1994, but I’m not sure… could be some years earlier also.

Although… did I say a simple setup? The GAL16V8 had to be programmed. My good friend Milo did design a programmer for that during college. Worked quite well! A GAL (Generic Array Logic) is not a micro controller, it just contains a bunch of logic gates, flip-flops, latches, and a huge matrix to connect all together in the required way. The matrix is the programmable part.

So, how would we go about building game buttons today? Of course there are numerous possibilities. For a small, lightweight portable system, for only the occasional use, I would use a battery powered ESP8266 (nodemcu) with a WS2812 RGB led (or some more of these leds) and small speaker for each button. Using a micro switch, and 3D printed button/case. The buttons would communicate wirelessly with each other using wifi, and the game master would use his/her mobile phone or tablet to connect to the button web-gui for game resets, and for the score counter.

That’s it for now. Quite a bit of nostalgia 😉