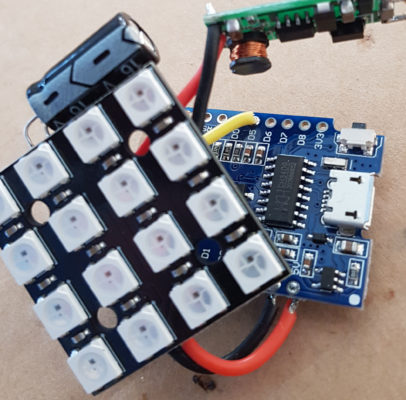 My daughter is quite artistic (as any proud parent would say), and created a wire animal in a bottle. For this bottle she wanted some lights at the bottom (inside), but… the requirement was that no wire may go through the glass (which would have made everything lots easier of course).

By total coincidence, some weeks earlier I did order some wireless power transfer kits. They contain two coils and two little electronics regulator boards to send and receive wireless power via the coils. Similar to how mobile phone wireless charging works.

That’s it. Glue it all together (I used some cardboard, and photo glue), put some firmware in the ESP/WeMos (compile and flash using the Arduino IDE), and all done.

Note: When placing the receiver coil over the transmitter coil to start the light, it can happen that the led’s all turn on in some random state. When that happens, it seems the WeMos won’t boot up properly. Perhaps too much power going at once to the leds in that case. Maybe I should look at adding some sort of delayed reset circuit (the ESP8266 does not seem to have a brown out detector / BOD). For now the workaround is to distance the coils (e.g. remove power), and put them back on top of each other, until the led’s stay off, and the chip boots up properly (can be seen from a flashing blue on-board led on the WeMos).

Here some images of the build and end result:

Note: the shown bottom plate is a temporary piece of card-board for now. We plan on replacing it with for example a cork or wooden coaster, in which we will embed the coil.

All in all a nice little project. The firmware is not really fancy right now, it allows for some configuration via a web interface, but needs some more cool features (like on/off switching, voice control, and color configuration). But it’s a start.